“The only time you ever have in which to learn anything or see anything or feel anything, or express any feeling or emotion, or respond to an event, or grow, or heal, is this moment … You’re only here now; you’re only alive in this moment.”   Jon Kabat-Zinn

I’m lucky to live in a state that has over 300 miles of rail-trails, so when I’m done with the morning’s writing (and it’s not January), I often go for a bike ride. Lose the tension in my shoulders. Let go of whatever problems my characters have posed for me that day (and those pesky people can cause real trouble when they choose).

My favorite loop, about ten miles out and back, takes me to Look Park, a vast oasis of  green lawn and blue ponds. The trail there mostly goes through wooded areas. At one spot, chickens and ducks waddle along the verge, scouring the long grasses and wildflowers for a snack to supplement their caregiver’s feed. The first time I saw them, I worried for their safety—so many bicyclists whizzing by—but over the years, I’ve come to realize they are proof of Darwin’s law:  Adapt or perish. They are obviously smart fowl.

At another spot, the land falls sharply away from the trail, and I glimpse the skeleton of a 1940s truck, blue in the patches that rust hasn’t eaten. Time. It’s always there, at some moments shouting, at others whispering.

No matter how scorching or muggy the day, a breeze lifts my hair, cools my skin, empties my busy brain, and I tune into the birdsong, tranquil. Which is what makes it all the more jarring when I pass a woman, walking with her toddler and talking into her cell phone. Seconds later, I cycle past another walker, this

one with ear buds connecting her to an iPod while she texts on her phone, fingers flying over the keyboard. There’s even a bicyclist—and I’m not making this up—pedaling along while texting two-handed.

We’ve all seen the absorbed texter (maybe even bumped into them!) walking through the airport, oblivious to others and their luggage or, like an errant pinball, caroming down a crowded city sidewalk only to step off the curb into traffic, unaware.

People speak of life passing you by, but our digital addictions are causing us to pass by life without pausing to register its pulse. Texting. Tweeting. And then there’s selfie-madness.

In June, I was at a Yankees-Red Sox game with my husband. Since we only go once a year, we treated ourselves to field level tickets along the first base line. These seats aren’t cheap, so I was surprised at how many people around us spent the entire game taking selfies, their backs to the ball field. They seemed to

prefer snapping photos of themselves attending a Yankees-Red Sox game to actually watching the play on the field. And it was a great game. Tense. The lead bouncing back and forth. Close score. But it often felt like my husband and I were the only ones following the action, a task not made easier by the bodies hurtling through our line of sight in search of the perfect location/angle/backdrop for a selfie.

I first glimpsed signs of what would become our digital mania in 2003 while vacationing in Florence, Italy. We were visiting Il Duomo (Santa Maria del Fiore) when I noticed a man walking about with a video camera, filming, his wife and kids doggedly trotting after. Although camcorders still used videotape at this time, they had shrunk considerably in size from their dinosaur predecessors of the mid-1980s. And this man was determined to make use of their newfound mobility.

He continued filming as we strolled about the piazza, admiring Ghiberti’s Gates of Paradise—ten dramatic bronze reliefs that depict Old Testament scenes on the doors of the Baptistery—and Giotto’s polychromatic marble-faced campanile with its della Robbia panels.

The camera remained glued to his face when we entered Il Duomo beneath the clock designed by Uccello, and traveled up, up, up the 463 steps to stand amazed beneath Brunelleschi’s architectural miracle of a dome, its interior graced with Vasari’s frescoes of the Last Judgment.

I never saw his face that day. In my mind, he remains a figure ambling about with a large camera where his head should be. I’ve often wondered if he and the family ever got around to watching the hundreds of hours I’m guessing he filmed during his Italian vacation. Or did he just move on to the next destination, camera at the ready, missing more moments of his life amid the wonders of the world? Perhaps he morphed into the guy I saw a decade later during another trip to Florence, a selfie stick strapped to his forehead, a camcorder suspended from its top, dutifully recording everything he was walking away from in the Piazza della Signoria, his face in the foreground.

With smartphones, the capture of every moment is only a click away. On the same trip that took us to Yankee Stadium, we spent a morning in the Metropolitan Museum of Art. We were hanging out in 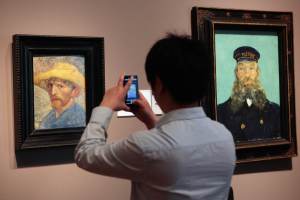 European Paintings 1250-1800, soaking up the dark mysteries of Rembrandt, the pink fulsome flesh of Rubens, the broad Flemish landscapes of Bruegel. Darting all about us, like a gnat you can’t seem to lose, was a woman snapping photos of every painting. And not only the paintings, but the little description cards that accompanied each work. Snap. Snap. Snap. She paused only a nanosecond to capture Vermeer’s Young Woman with a Water Pitcher before buzzing off to give Franz Hals’s Portrait of a Bearded Man with a Ruff the same blink of her camera.

I can report she missed not a single painting, but in another, more significant way she missed them all. If that seems an exaggeration, pick up a postcard of Van Gogh’s extraordinary painting of a chair, called reasonably enough Van Gogh’s Chair, and compare it to the original that hangs in London’s National Gallery. A picture may be worth a thousand words, but an amateur photo of a major artwork is… squat.

Patti LuPone Takes On The Texters

And when we’re not filming, we’re texting. Two years ago, while starring in Shows for Days, actress Patti LuPone grabbed the cell phone of an audience member in the front row who had been texting through the entire first act. The cast and audience had already endured four separate cell phone rings during that day’s show, so tempers were somewhat frayed.

“She was sitting in the light, so everyone could see her texting. It’s ridiculous,” LuPone said.

Lupone returned the phone after the performance was over, but gave vent to her distress. “I’m defeated by this. It’s not changing, it’s only getting worse … If something isn’t done, I will think twice before I get back on a stage again.

“It’s not [about] theater etiquette,” she explained. “It’s human etiquette. We’re living in an isolated society, the phone controls our every move, and we’ve lost sight of our neighbor, the people surrounding us.”

One of the great ironies of our cell phone addiction is that it was preceded by an innovation that freed us from our phones: the answering machine. They were a revelation, a revolution. No longer did you have to worry about missing an important call. It would be there on the little cassette when you got home. You were free to go about your day, or travel the world, without once thinking of your phone. It was a golden time, however short-lived.

Okay, I’ve had my moment on the soapbox. Now it’s time for you to play along.

When did you last:

2. Visit an art gallery or museum using only your eyes, no camera (photos of you and loved ones in front of the museum don’t count here)? 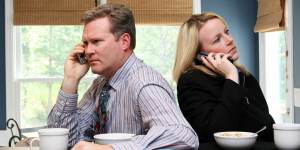 3. Pick a dining spot in a city not your own by walking along the streets “window shopping” restaurants and cafes rather than googling TripAdvisor or Yelp?

4. Enjoy a cup of coffee or a glass of wine at a café with your significant other and no cell phones in sight?

5. Browse a brick-and-mortar bookstore—with actual shelves and real books you can open and read—rather than surf Goodreads for recommendations, then order from Amazon?

6. Go for a hike or a bicycle ride naked—no iPod, no earbuds, no smartphone?

If you can’t recall the last time for any or (yikes!) all of the above, I suggest you get out into the world immediately. Talk to real people. Listen to the sounds of summer—the buzz of bees, kids laughing, birds trilling, the lap of water at the beach. Literally, stop and smell the roses.

And give your texting thumbs a rest. For there are more things in heaven and earth, Horatio, than are dreamt of in your mobile apps.