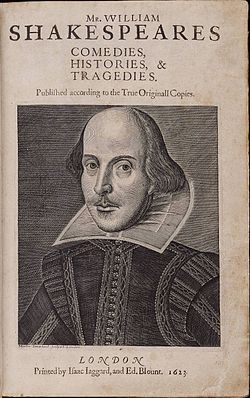 April 23 marks the 400th anniversary of Will Shakespeare’s death. Celebrations of the Bard, his life and work, are scheduled throughout the world, including the first-ever (!) opportunity to see his school room at the King Edward VI School in Stratford-on-Avon (I would probably walk in, drop to my knees, and kiss the floor).

Shakespeare was and is a BIG DEAL. He almost single-handedly put British theatre on the world map. Four centuries later, people still valued his work enough to rebuild the Globe Theatre near its original site in Southwark. Some 400 television and feature-length films have been made from the Bard’s work, according to the Guinness Book of Records (including Kurzel’s excellent Macbeth, 2015), making Shakespeare the most filmed author. In any language. Ever. Hey, I invested £2 to buy a “brick” for the reconstruction of Shakespeare’s Globe Theatre in London back when £2 was a lot (to me, anyway).

His wizardry with words is legendary. Without Shakespeare, those opposed to borrowing and lending money would have no recourse to the pithy line “Neither a borrower, nor a lender be.” Magicians could not announce that the rabbit “vanished into thin air.” Nor lawyers claim that their client’s innocence is “a foregone conclusion.” We could never grouse that we are 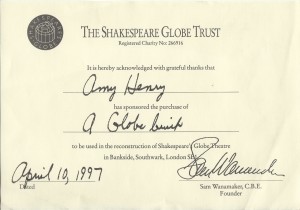 “more sinned against than sinning.” And none of us would be able to say “good riddance” to Donald Trump.

As I considered how I would like to honor Will’s life in this space, it occurred to me to shine a light on two players in the shadows: John Heminge and Henry Condell. Together, they compiled and edited one of the greatest literary treasures in all history, the First Folio. Or, as it was titled in their time: Mr. William Shakespeares Comedies, Histories, & Tragedies.

The First Folio: What Its Editors Had to Say

The First Folio appeared in 1623, seven years after Shakespeare’s death. That the 36 plays it contains represented a monumental undertaking for Heminge and Condell is proved by their own words in the Preface:

“It had bene a thing, we confesse, worthie to haue bene wished, that the Author himselfe had liu’d to haue set forth, and ouerseen his owne writings; But since it hath bin ordain’d otherwise, and he by death departed from that right, we pray you do not envie his Friends, the office of their care, and paine, to haue collected &publish’d them… ”

So, it was something of a royal pain to collect and get Will’s work into shape for publication, and the two editors got cranky on occasion, suspecting the Bard of taking the easy way out by dying and leaving the task to them. And yet, they did it. (Read the entire Preface here.)

So who were these guys?

John Heminge came to London at age 12, where he spent most of a decade apprenticed to the City Grocer. He eventually became a freeman of the Grocer’s Company, and a year later he married the widow 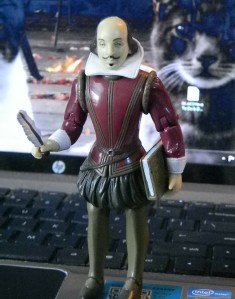 of an actor. Perhaps she exerted some strange influence or maybe it was the company she kept, but Heminge soon ditched produce for a life on the stage.

Less is known about Henry Condell’s early life, but by the early 1590s both men were actors in the theatrical company Lord Strange’s Men. There, they trod the boards alongside Augustine Phillips, Richard Burbage, and an aspiring young playwright, Will Shakespeare. These five men would continue to work together—first, with Lord Strange’s Men, and then The Lord Chamberlain’s Men  (which became The King’s Men after Elizabeth I’s death)—until Phillips died in 1605 and Shakespeare retired to Stratford in 1610.

Like Shakespeare, both Heminge and Condell had shares in The King’s Men, and Heminge was the company’s financial manager. Heminge also owned a share in the Globe Theatre where, in true entrepreneurial fashion, he operated a taphouse. When Shakespeare purchased the Blackfriar’s Gatehouse in 1613, Heminge was one of the trustees. He and Condell were bequeathed 26 shillings and eightpence in Shakepeare’s will to purchase mourning rings in his memory.

John Heminge and Henry Condell were much more than Shakespeare’s fellow actors and business associates. They had his trust. They had his back. They were two of his dearest friends.

Something of a Miracle

To appreciate what a truly remarkable gift the First Folio is, you need to realize how easily it might never have happened.

Elizabethan theater was fast-paced and demanding. When not shut down for plague or political squabbles, eight or nine companies played to audiences six days a week. And they weren’t doing three-month runs of Hamlet or Dr. Faustus. The actors in these companies never performed the same play two days in a row, and rarely twice within the same week. In 1592, for example, Lord Strange’s Men performed 23 different plays in a four-month stretch

The leading actors, on average, memorized 800 lines of verse for each play. At six plays a week, that’s almost 5,000 lines they had to keep in their noggins.

Bottom line: They needed plays. LOTS of plays. Playwrights had to write, rewrite, and collaborate at high speed. Yet, of the thousands of plays estimated to have been written in the 80 years from 1562 until Parliament banned all theatrical performances in 1642, only a small fraction have come down to us. That no other English playwright from that era has a surviving canon of works to rival Shakespeare, we owe to the diligence and love of Heminge and Condell.

The dearth of plays that have come down to us from the Bard’s time has much to do with Elizabethan publishing practices and the nature of the theatre business. Only half of the First Folio’s 36 plays appeared in print during Shakespeare’s life. And, as Heminge and Condell lamented, these publications were often “stol’n and surreptitious copies, maimed, and deformed by the frauds and stealthes of injurious impostors.”

Copyright laws didn’t exist yet, so printers interested in making a few bob were not above pirating a company’s prompt book (the single transcript of a play used during performances, cluttered with stage directions, instructions for sound effects, and the names of the actors).

Worse yet, in terms of posterity, were the quarto editions reconstructed from the memory of someone who had seen the play. What could possibly go wrong there?

To answer that question, compare the opening lines of Hamlet’s famous soliloquy in these two examples:

The Real Shakespeare (from the First Folio):

To be, or not to be–that is the question:
Whether ’tis nobler in the mind to suffer
The slings and arrows of outrageous fortune
Or to take arms against a sea of troubles
And by opposing end them. To die, to sleep–
No more–and by a sleep to say we end
The heartache, and the thousand natural shocks
That flesh is heir to. ‘Tis a consummation
Devoutly to be wished. To die, to sleep–
To sleep–perchance to dream: ay, there’s the rub,
For in that sleep of death what dreams may come
When we have shuffled off this mortal coil,
Must give us pause. There’s the respect
That makes calamity of so long life.

The “remembered” Shakespeare from a quarto of Hamlet, published 1603:

To be, or not to be, aye there’s the point
To Die, to sleep, is that all? Aye all:
No, to sleep, to dream, Aye mary there it goes,
For in that dream of death, when we awake
And borne before an everlasting Judge,
From whence no passenger ever returned

I’d continue, but I think you see what Heminge and Condell were up against and why they felt it so important to publish the original works.

Without copyright protection, playwrights had nothing to gain from publication, and the theatrical companies who purchased their scripts had everything to lose. A published play gave other companies access to their property. Rival companies might beat you to the punch, and suddenly there’d be four productions of Hamlet going.

The First Folio was the first publication to group Will’s plays into comedies, histories, and tragedies. It gave us the Droeshout portrait of Shakespeare, considered a true likeness by scholars because it was chosen by two men who knew him well.

But the real gift of Heminge and Condell’s work is that the First Folio preserved 18 of Shakespeare’s plays that had never been printed before. If you think the work of a few people can never make much difference to the world, consider this: Without their efforts, the following plays would have vanished with Will’s death.

And most of the others would be known to us only through cheap bootleg editions.

To say Will Shakespeare rocked his world and ours is an understatement. He defined romantic love with Romeo and Juliet. Weighed justice in Measure for Measure. Stared into the dark abyss of ambition in Macbeth. He explored our most base and best selves. Took mercy on our human failings. Celebrated our triumphs of spirit. He is funny, irreverent, honest, brilliant. I would give anything to buy him a beer at the Mermaid Tavern. If he were still here and it was still standing.

What links a writer to posterity is no more and no less than his or her words on the printed page. And for that, in Shakespeare’s case, we owe everything to Heminge and Condell.