The only journey is the one within.  (Rainer Maria Rilke)

In the interest of full disclosure, I’ll state upfront that I have often—half jokingly, half seriously—referred to life as a minefield. Running, running down the days, the years, in pursuit of life, liberty, and happiness. All the while, one eye out for those pesky tripwires, ducking, dodging the myriad hazards until I land on the one that blows me sky high, game over. An event, hopefully, far off in the misty future.

This is not as dark a characterization as it may sound. I would describe myself as a happy person. I have a major sense of whimsy. Love to laugh, love to joke. The minefield thing is more of a heads-up approach to the great unknown that greets us each morning. And the near-miss can be quite exhilarating, just as I imagine it is on a real battlefield.  Ha-ha, dodged that one! There’s a sense of inner strength. The ability to endure.

But what happens when we encounter one landmine after another—family illness, natural disasters, a precipitous drop in circumstances, a nutso president and his arsenal of threats? The constant state of high alert wears us out. When will there be good news? Can we make it to a place where we can draw a free breath?

Wisdom Through the Ages

As any trawl through Twitter will attest, most of us seem to have a need for guideposts. A map through the minefield, or at least a large supply of encouraging words.

Forget Everything And Run

Face Everything And Rise

The choice is yours.

Sometimes, it appears as a balm to a wounded heart:

One small crack doesn’t mean that you are broken;

it means that you were put to the test and you didn’t fall apart. (Linda Poindexter)

Thomas Jefferson, in his famous “10 Rules of Life” suggested (Rule #9) that we Take things always by their smooth handle,

while Winston Churchill cut straight to the chase: If you’re going through hell, keep going.

Perhaps the most famous example of such words of wisdom—WOWs, we’ll call them—is the “Serenity Prayer,” written by theologian Reinhold Niebuhr, and made famous by Alcoholics Anonymous:

God, grant me the serenity to accept the things I cannot change,

Courage to change the things I can,

And wisdom to know the difference. 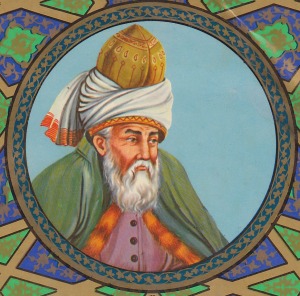 So what does some Sufi dude born in 1207 know about life in the 21st century? How does a poet who lived before the invention of the printing press speak to us who navigate the digital age?

Up top, I spoke of life as a trip through a minefield, always ducking and dodging as we race toward the hazy future. But, it’s more often a confused slog of uncertainty (as opposed to outright catastrophe), and uncertainty makes us anxious. Faced with a disaster, we tend to deliver: roll up our sleeves and get to work. Uncertainty, on the other hand, can paralyze. Like a hedgehog, we curl up in a ball and wait for clarity to strike. Or we stumble about, unfocused, grasping wildly at every straw. 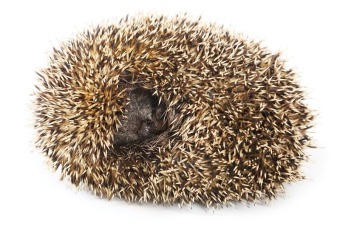 And Rumi absolutely got this. You don’t need to be born in the age of the iPhone X to recognize our need to believe we run the show. Our craving to have control over our lives. It’s the most basic of all human tendencies. And yet, of course, we don’t. The folks in Puerto Rico couldn’t turn Hurricane Maria away from their shores. The concert-goers at the Route 91 Harvest Festival in Las Vegas couldn’t vanquish the bullets of a madman’s bump-stocked semi-automatic rifle.

So somewhere in my wanderings, I came across this verse from Rumi, typed it up in 24-point bold, and taped it to the bookcase by my desk:

Keep walking, though there’s no place to get to.

Don’t try to see through the distances,

That’s not for human beings. Move within,

But don’t move the way fear makes you move.

When the weight of uncertainty threatens to sink me, these lines tease my brain to look beyond the moment, to consider something outside my flailing angst. For almost two decades, I have sifted Rumi’s words for a way I can live with “what is” with something approaching grace. I’m still pondering, still learning. This is merely my interim report. What I’ve gleaned so far.

Keep walking, though there’s no place to get to.

We are creatures of ambition. We love to make plans, set goals, imagine ourselves moving smoothly from success to success. We crave “places to get to.” It is hard, hard, hard for us to move forward without these destinations to propel us. Like a person wandering the desert, plans and goals are the oasis we thirst for, a mirage always on the horizon, just over the next hill. We may get there, but rarely the way we imagine. And if we do, the reality of the mirage may be quite different to what we fantasized. As John Lennon said, Life is what happens to you while you’re busy making other plans.

It’s not that plans and goals are bad or futile, but we need to recognize two things: 1) We create them. Our pictures of dazzling accomplishments and ideal lifestyles are self-imposed, the children of our own brain—they have no mandate in the natural world; 2) They can go south at any moment and often do.

If our happiness, our very ability to function, depends on getting into an Ivy League school, making partner at the law firm, or having our novel published by one of the “Big Five,” we make ourselves vulnerable to the vagaries of life. Ask anyone in Puerto Rico or the Virgin Islands. One day, you’re making breakfast, going to work, dreaming of the new motor scooter business you’re going to start this winter, just in time for tourist season, and the next day you’re homeless, stumbling about your hurricane-wrecked island, searching for drinkable water.

Don’t try to see through the distances,

That’s not for human beings.

But we do try, over and over. We want to know what lies ahead. We want to shore up against any and all disappointments, disasters. We have no say about the circumstances of our birth, nor (discounting suicide) the hour of our death, so we scramble like hell between these endpoints to foresee the future, and prepare.

I don’t read this as we should do nothing with the knowledge we have at hand. Rather we do today what we can do, and let neither our hopes blind us to reality nor our fears cripple us. We join a campaign to get our town to commit to renewable energy. We donate to a legal fund to defend Dreamers. We write the next chapter of our novel. We study for the exam. The outcomes are unknowable. We can only act in the moment.

If you read this blog regularly, you know I’m a big fan of history, partly because I simply love stories, and partly because I want to understand the patterns of human behavior. Over the years, two key things have emerged for me:

1) Everything you have, including your life, can be taken from you at any moment. Think Nazis. Think ICE. Boko Haram or Czar Nicholas II. There are no guarantees, no talismans. The trick is to somehow acknowledge this truth while living each day with joy and generosity and hope. That is grace.

2) We tend to focus on the threats all around us. Survival instinct, no doubt. What we fail to see, cannot see in fact, is the thing that may happen to throw a monkey wrench into what looks like doom. The discovery of a vaccine for polio. The tiny island of Britain shutting down Hitler’s voracious advance, alone, for two years until America joined the fight. And there are people out there right now inventing

There is as much hope as threat in what we cannot yet see.

But don’t move the way fear makes you move.

Ah, this is the one I puzzle over most. I get the “don’t move the way fear makes you move.” Don’t delete your manuscript because 20 agents turned down your novel. Wake up tomorrow and query Agent #21, and if no one bites, ever, keep writing because it’s what you love. Don’t abandon fighting for a more humane and cooperative world because white nationalism is showing its ugly face across the planet and Trump is in the White House. Make phone calls to defend Dreamers. Raise your voice in Town Halls for diplomacy, not war. Bring a sick neighbor a meal. Give a stranger a genuine smile.

Okay, I get that. But what does it mean to “move within?” Within the limits of the day at hand?

Move within the confines of our own head? Change the perceptions that color how we view the world. The assumptions that drive our actions.

How would the quality of our life be different if we saw our mistakes not as failures but as practical wisdom gained? If we viewed setbacks not as insurmountable roadblocks but as opportunities to explore new and different paths?

What if we were to relish the journey of this day rather than tizzy over some imagined endgame?

To Look On Tempests

Searching these deceptively scant lines for Rumi’s meaning, meditating on his many subtle layers, has been comforting, energizing, life-affirming. Heeding it has been much harder. I still exist on the far side of grace, that state in which I can face the truth of each moment without panic, without despair. To look on tempests, as Will Shakespeare said, and remain unshaken.

To keep walking. Whatever.