Wine comes in at the mouth

And love comes in at the eye;

That’s all we shall know for truth

Before we grow old and die.

I lift the glass to my mouth,

Whether you’ve recently “fallen off the horse” or are just getting “back in the saddle,” or are happily wrapped up snug with your true soulmate, the inevitability of falling in love (again, and again) seems to be a truth universally acknowledged, as Jane Austen would say. Along with oxygen, water, and food, we crave love.

One of the great things about falling in love is that you never know when it’s coming. On your worst day, in your darkest hour, it’s entirely possible you will turn a corner and bump right into your heart’s desire. Neurons will release a flood of feel-good dopamine in your brain. The sun will feel sunnier. “All the world loves a lover,” Ralph Waldo Emerson wrote. But when it comes to romance, the smart money’s on Shakespeare: “The course of true love never did run smooth.”

When Love Comes in at the Eye

Wallis Simpson, that perky American socialite, was twice-and-still married when she met England’s King Edward VIII. Their love caused a tremendous scandal when the king abdicated his throne to marry her in 1937. “You have no idea how hard it is to live out a great romance,” Simpson told the press.

The fact that love catches us unaware means it can go in many directions, assume many forms. Though Simpson caught a lot of flak for her royal romance, at least she had her newly-dethroned husband to

share the backlash with. But what if she’d found herself in love with King Edward VIII from afar? If, say, she was on the palace payroll and it had been her job to bring the king’s slippers to the royal billiard room every day at 4 p.m., where she would be permitted to (discreetly) stare at his magnificent form for thirty seconds before banishing herself to swoon and gnash her teeth in the outer hall?

That’s unrequited love, and while those in the throes of break-up agony may tell you how lucky you are, most of us find one-sided love somewhat unfulfilling and awkward. You have to invent endless, ridiculous reasons to spend snippets of time with the object of your adoration—snippets in which it must appear your interest is completely platonic. It’s one thing to feel pathetic privately—you can keep a secret—but the worst thing that can happen to you as the enamored party in unrequited love is to be found out.

Yet, when “love comes in at the eye,” it’s a rare person who can look away. Even from that most futile of all romances—the long distance crush.

During the latter part of a difficult marriage, I saw Colin Firth in Love Actually. To say I was utterly gobsmacked would be a serious understatement. I’d been a fan of Firth since I first saw him in A Month in the Country. Thought him a talented actor. Had seen many of his films, including Bridget Jones’s Diary (in which any sane woman would have melted instantly into a flaming puddle). But it was not until that moment in 2004, out-of-love in real life, that I stared at the screen and wondered why I’d never realized just how gorgeous, funny, sexy, smart Firth was.

Anonymity in love has its obvious pains but it also has its pleasures. For three happy years, I chattered about all things Colin on a fansite with my (I’m not making this up) “Firthsisters.” I had it so bad, I drove all the way to the Toronto Film Festival hoping he’d show up to promote his new film (he didn’t).

But the experience, overall, was joyful, giddy, energizing—all those reasons we love falling in love. I met lots of fun, lively women on the fansite with whom I shared a billion laughs as well as some memorable photos (one Aussie Firthsister was especially skilled at getting great “stills” from films where Colin had a shower scene). And it rescued me at a time when I was in the limbo cycle of love. You know, the one where you keep asking yourself What was I thinking?

I Must Have Been Bonkers

When we fall in love, we tend to zero in on some things about the object of our affection and ignore others, sometimes HUGE others. I call this “messages we should have paid attention to.” My favorite of all time is the woman who confessed that, when they were dating, her future husband remarked “I’m just not that into relationships.”

This is the phase in some romances where the person who loves world travel grinds their teeth over the partner for whom travel is a trip from the recliner to the fridge. It’s the moment (or years) when the social butterfly who loves to dance and mingle realizes they’re shackled to a dead moth. It’s the standoff between those who crave intimacy and those for whom stonewalling is not a reference to the 1969 LGBTQ uprising in Greenwich Village, but an eternal, defensive silence.

Discovering that you and your honey are in the square-peg/round-hole configuration doesn’t necessarily end a romance. I know Democrats who have been married to Republicans for decades (wonder how they’re doing now), and urbanites who settled with backwoodsy types. Power to them, but when one or both people have to give up too much of what they love, or compromise too much of who they are, moving on may be the healthiest, least painful choice.

Depending on how long you’ve lived with your stalemate (apologies for the pun), and a whole bunch of personality analytics I have neither the space nor time to research here, moving on may be a HUGE relief. Or you may spend some time licking your wounds in romance hell. This is usually the place where people vow to: 1) join a convent; 2) build a yurt in a remote corner of Mongolia; 3) hire a hitman.

In her autobiography, actress Vanessa Redgrave recounts the time she was dumped by her husband Tony Richardson for another actress whose film he was directing. She’d come to visit him on location, completely clueless, and he gave her the news. She described the long evening she spent in a little seaside bar, playing over and over every sad song on the jukebox. 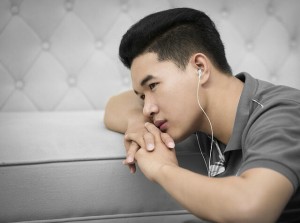 Heartbreak is definitely the basement bummer of romantic love—the roughest part of love’s bumpy ride—and most of us have logged in some time there. I remember sitting in the living room of my Boston apartment after a breakup, a bottle of Jameson’s by my side, a stack of weepy records on the stereo (shades of Redgrave), watching my roommate paint the living room.

If I’d only known I would join a writing group two weeks later and fall in love again, I might have got my derrière off that chair and picked up a brush. But then, love is always a surprise. If you want to get to the Bliss, you have to throw yourself out there and take a chance on happiness.

Oh, the high of falling in love. It’s what leads poets to write stuff like “You are whatever a moon has always meant and whatever a sun will always sing.” (e.e. cummings) It’s why we can’t pack it in and join that convent/monastery. Or become a hermit in the back of beyond.

This flawed and fabulous thing that is love answers our deepest longings to know and be known. The universe is infinite but we are very finite. In our short hour, we seek someone who will grasp who we are and love us for all that. 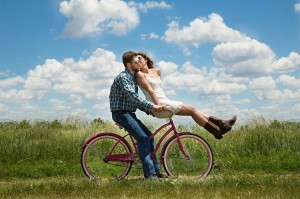 When my first marriage was breaking up, I wondered if I’d ever get seriously involved again. I was feeling a bit burnt out at the time. It seemed more attractive to embrace my freedom. Move to London. Focus solely on my writing, and limit romance to the occasional fling.

At the time, I was spending much of my day in a local coffee bar, writing freelance articles for magazines. A number of regulars frequented the place, and on a Friday afternoon one of them touched me on the shoulder as he left, and wished me a good weekend.

That was 10 years ago this summer, and the man (we’ll call him Ed because that’s his name) turned out to be the love of my life. The winning ticket in the lottery that is romance.

“The heart never really shuts up,” one character says in a novel I penned some years back.

It may not be elegant prose. But it’s true.

14 thoughts on “Fools Rush In: A Valentine to Love’s Crazy, Twisty Ways”